Hi Everyone.
A Goalkeeping CPD date has been pencilled into the dairy for Satursday 12th July at Canford Arena 10am to 12pm.
Between the sticks will lead session for grass roots coaches (who will take part themselves) covering many aspects of goalkeeping. Introduction to goalkeeping will be lead by FA tutor Robbie Yates (Poole Town) Neil Moss (AFC Bournemouth) Gareth Stewart (Yeovil Town) & senior BTS coaches. Final details & topics to follow.
To book your place call (01202 647054) Andy Battison at Dorset Football Assossiation.
( note * do not contact BTS this is an official FA event)
We will look forward to seeing you at the event.
All the best
BTS
Posted by Between The Sticks at 19:45
Email ThisBlogThis!Share to TwitterShare to FacebookShare to Pinterest

Hi
Between the Sticks is now on Facebook.
If you would like, visit and say hello to everyone at BTS visit our home page.
We look forward to talking to you regarding anything goalkeeping.
Robbie, Mossy, Jenny & the BTS team.
Posted by Between The Sticks at 13:32
Email ThisBlogThis!Share to TwitterShare to FacebookShare to Pinterest

Hi Everyone.
Please note from 13th May until 25th May Jenny will be unavailable at BTS.
All enquiries please contact:- Julie, Mossy or Robbie in that order.
Julie -  07534 929477
Mossy - 07956 115651
Robbie - 07776252414
Julie will cover Jenny on Mondays until 25th.
Thank you for your cooperation
BTS
Posted by Between The Sticks at 20:02
Email ThisBlogThis!Share to TwitterShare to FacebookShare to Pinterest

It was good to see Charlotte at BTS training again after her success with the England under 15 squad.
We are all very proud of Charlotte's achievements. She has worked very hard on her goalkeeping. Charlotte knows she has lots of work to do still & that's what is important for any Gks that wants to progress. It just shows you what you can achieve in just 4 years from grass roots to international level.(See past article regarding Charlotte's games)

Pictured below is Robbie with Charlotte with her England cap. 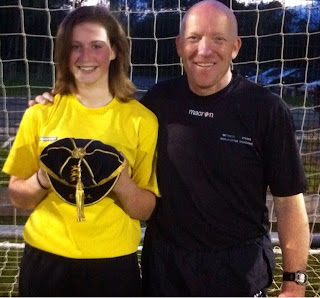 Posted by Between The Sticks at 13:41
Email ThisBlogThis!Share to TwitterShare to FacebookShare to Pinterest

Between the Sticks would like to apologise for any parent or goalkeeper that did not receive a text from Jenny regarding no coaching on Bank Holiday Monday May 5th.
We have had technical issue with our texts service. Hopefully everyone has found out through Twitter, Face book or our web site.
Back to normal next Monday (note we all ways close on a Bank Holiday)

Next Session Thursday 8th May.

All the best BTS

Posted by Between The Sticks at 17:13
Email ThisBlogThis!Share to TwitterShare to FacebookShare to Pinterest

Well done to Between the Sticks Goalkeeper Charlotte Johnson.

Robbie Said " I am so proud of Charlotte to come so far in such a short while, working hard proofs you can reach the standard Charlotte has, its amazing"

Also 2 other players from the Dorset Centre of Excellence Kelly Snook & Jasmine Hughes played for the squad, Well done to them all. Below is an article from the Dorset FA May edition Three Castles.

Three Dorset Schoolgirls have been members of the English Schools’ Under 15
squad this season. Pictured from left to right are:
Kelly Snook, Charlotte Johnson and Jasmine Hughes.

The Trio have just played in the Bob Docherty International Tournament at
where beat , and the
to secure the Trophy for the first time.
In addition to this Tournament the squad have enjoyed a successful season at
international level, beating two Norwegian sides during a training camp in
and beating the of 8 – 0 in a friendly match at
United’s ground.
Congratulations to the players and the Dorset FA hope that your career in
Women’s Football continues to flourish.

Well Done from all at BTS

Posted by Between The Sticks at 23:02
Email ThisBlogThis!Share to TwitterShare to FacebookShare to Pinterest

Hi
Just a quick reminder that BTS will not be coaching Monday 5th May "BANK HOLIDAY"
Have a good bank holiday weekend !!!!!
From all at BTS
Posted by Between The Sticks at 06:46
Email ThisBlogThis!Share to TwitterShare to FacebookShare to Pinterest
Newer Posts Older Posts Home
Subscribe to: Posts (Atom)