Hi everyone
Message to all keepers. As it is now expected that the 3G pitch will be wet for the majority of the time during the winter, it is recommended that PLASTIC moulded studs or PLASTIC blades be worn. It can be very slippery if astro trainers are worn and we wish to avoid unnecessary injuries to our goalkeepers.

BTS
Posted by Between The Sticks at 18:43
Email ThisBlogThis!Share to TwitterShare to FacebookShare to Pinterest

!! Robbie on tour with Australian Centre of Excellence !!

Australian English football League Centre of Excellence under 16s came to the uk on tour playing premiership and football league Coe & academy sides headed by technical director Paul Hubbard. With a very heavy schedule playing Stoke, Cardiff, Aldershot, Swindon, Portsmouth and Bournemouth over a two week period Robbie had to coach Jordan Holmes a very young promising goalkeeper. The high light for Jordan was being invited into AFC Bournemouth working and meeting David James & Shwan jalal. Jordan enjoyed the session very much headed by BTS very own Neil Moss with Robbie assisting. Shawn was very impressed with Jordan saying "Jordan did very well especially being very young held His own very well"
The tour was a great success with 6 players being asked back for 6 week trails with different clubs Jordan being one of them.
Robbie said "the experience the players will get from this tour will put them in a good position what to expect in England the pace of the game alone is much different.
Paul has done a great job with the players many more tours will be organised for the future. BTS are very pleased to be associated with the Centre. 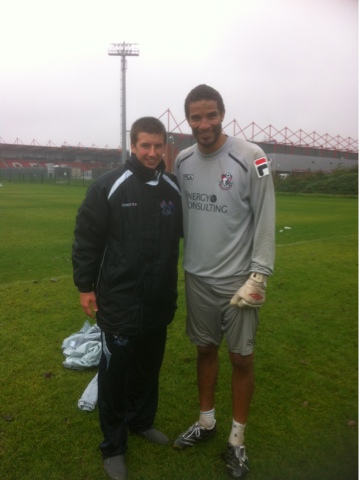 Posted by Between The Sticks at 19:29
Email ThisBlogThis!Share to TwitterShare to FacebookShare to Pinterest

Between the Sticks Development Night in association with Dorset FA
Coaching Youth Goalkeepers was held on Tuesday 25 September 2012 @ Canford Park 3G Astroturf, Wimborne (6.30pm – 8.30pm)
This event was open to all coaches throughout the County & the feed back has been excellent. Dorset development Officer Andrew Battison was delighted with the numbers attending the event at Canford 3G.


38 coaches enjoyed the sessions delivered by Between the Sticks coaches Robbie Yates, Neil Moss, Gaz Stewart, Nick Hucthings & Dave Walsh.
Each BTS coach worked with grass roots goalkeepers from all over Dorset which were split into small groups with different topics.
Then the coaches were also split into small groups allow more interaction with the BTS coaches & coaches attending the night.

Neil Moss session was Set position, W, Cup & Scoop, Robbie & Nick's was Low & High Diving Save, Gaz session was Distribution with feet & Dave's session was Central & Angled Shot Stopping.
Each session lasted 20 minutes with debriefs at the end of each session for the coaches to ask any questions.


Each coach  left the night with a hand book of the sessions relating to this event.

With the success of this event Dorset FA would like to organize more events for the future.

The night was filmed & a short DVD will be produced look out for the video on the BTS web site..

BTS would like to thank Andy Battison &
Dorset FA for their support in working with Between the Sticks to develop Goalkeepers & goalkeeper coaches.

Posted by Between The Sticks at 22:16
Email ThisBlogThis!Share to TwitterShare to FacebookShare to Pinterest
Newer Posts Older Posts Home
Subscribe to: Posts (Atom)